Visualization of Historical Knowledge Structures: An Analysis of the Bibliography of Philosophy

ABSTRACT This poster presents statistical, geospatial, and network visualizations of the history of philosophy as reflected in bibliographic work in the field. Together, these interactive visualizations explore the prospect of comparative bibliography within the digital humanities. 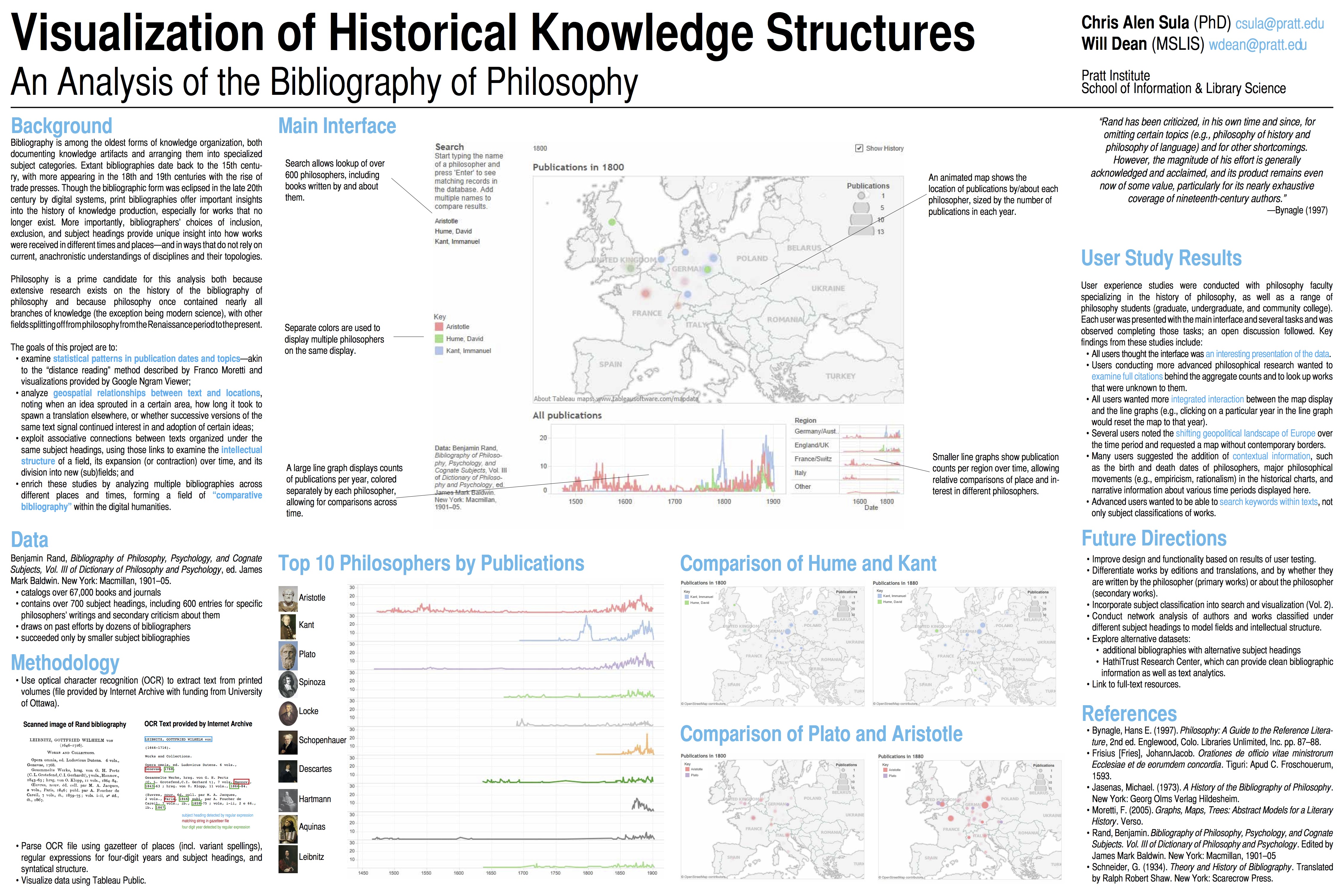 Explore the interface prototype by clicking on the image below.

The Ethics of Visualization

Visualization and infographics are widely discussed today, both inside of the academy and in the public at large. Academic departments as diverse as digital arts and humanities, cognitive science, and molecular chemistry have taken up the topic, and journalists like Geoff McGhee even claim that our future is one “in which data becomes a medium.” But despite its popularity and potential impact, “infovis” has rarely been considered in an ethical light. While there has been recent development on the philosophy of information, there is still little corresponding to an applied ethics of visualization and even less guidance available for information professionals. This talk examines the groundwork of infovis ethics and considers several ways in which visualization could give rise to obligations to/for certain groups. The conclusion will situate infovis within a techno-historical context, which raises broader issues of access, representation, and power with respect to visualization.

Representing Bioethics: The Degrees of Bioethics

ABSTRACT  Bioethics is a highly interdisciplinary field, drawing together philosophers, theologians, physicians, nurses, public health professionals, policymakers, and more. Authorship of bioethical journal articles reflects these diverse educational backgrounds, yet not all of these disciplines are represented evenly throughout the literature and it is unclear to what extent authors from different backgrounds engage with each other in the printed record of the field. Given the interdisciplinary nature of bioethics, it especially is important that all relevant fields have a voice in the literature, and understanding which groups are underrepresented (or unrepresented) is the first step toward achieving such inclusion. This poster presents an empirical bibliometric study of citation patterns in bioethical articles from 1970 to 2010 with a special emphasis on authors’ degree(s) (e.g., PhD, MD, PhD/MD, MPH). This analysis reveals which educational backgrounds are most prominent in the literature, as well as patterns of scholarly communication—for example, are philosophers more likely to cite other philosophers rather than physicians (and vice versa) and, if so, to what degree? We also examine which articles are most highly cited by authors from various backgrounds and make several recommendations for diversifying and integrating the field.

“Philosophy through the Macroscope: Technologies, Representations, and the History of the Profession”

ABSTRACT  Macroscopes are tools for viewing what is too large, complex, or dynamic to perceive with the naked eye. This paper examines the use and history of macroscopy in philosophy to represent ideas, trends, and other aspects of the field. Particular emphasis is given to the growing Phylo project, which combines data, user collaboration, and visual analytics to advance the study of philosophy. This paper also presents two pilot studies focused on unique aspects of Phylo: one on the perceived importance of social connections in philosophy and the other on information visualization and academic philosophers. The second study, in particular, points toward several recommendations and areas of further research, and underscores the value of macroscopy in representing the field and suggesting interventions.

Adapting to Digital Environments: Evolutionary Ethics and the Challenge of Privacy

0 Comments/ in *Conferences, Philosophy, Theory, and Ethics / by chrisalensula
January 25, 2012

Accepted for Information Ethics Roundtable 2012
Hunter College, CUNY
New York, NY
April 27–28, 2012
ABSTRACT  In addressing questions of information privacy in the twenty-first century, many theorists and policymakers have turned to the pre-digital era to examine legal, political, and philosophical foundations of privacy, generally speaking. This paper considers even more distant foundations of information privacy from the perspective of evolutionary ethics. Recent work in evolutionary psychology presents the following puzzle: many believe that natural selected favored altruism in the course of human evolution, yet our ancestors’ environment is so different from our own that any altruistic instincts we have inherited may provide a poor foundation for ethical behavior in the present. The case is doubtless more complicated in digital environments, which are even more remote than the merely physical ones of our ancestors. In this paper, I examine the continuities and discontinuities between the early adaptive environment (25,000–75,000 years ago) and current digital environments as they relate to personal information and social interaction. This analysis centers on the presence and size of communities in each type of environment, the roles of social monitoring and punishment, practices and expectations of reciprocity, the presence of egalitarianism, and so-called behavioral contagion. With this empirical framework in place, I then assess the prospects for privacy in present and future digital environments. In particular, I contrast the case of social networks (which in many ways mirror small groups in the early adaptive environment), with large-scale data warehouses (which represent a considerable departure from that environment). This analysis highlights special areas of ethical concern in which human instincts alone (however optimistically assessed) are unlikely to produce ethical behavior. I conclude by reflecting on the challenges for our species as we enter these new, digital environments.

Accepted for the 36th Annual Meeting of the Society for Utopian Studies
The Nittany Lion Inn on the Penn State Campus
State College, Pennsylvania
October 20-23, 2011

ABSTRACT: Suppose we imagine an archivist who has managed to collect all the individual pieces of knowledge ever available and preserve them in some common or useful form. Suppose further that our archivist wants to make this information as widely available as possible. Even setting aside real problems of literacy, disability, language, and the like, a key question will still remain: how to arrange this information to facilitate the public’s access to it? This paper surveys three different models for arranging the archive (expert/authoritative curation, crowdsourcing, and computational methods), noting the theoretical and practical implications of each. I argue that the authority model, still largely in use today, has some advantages but is also likely to reproduce biased and oppressive attitudes of the authorities or their historical situation, which reflects longstanding concerns about power and control present in utopian and dystopian thought. Following that, I examine the crowdsourcing model as an instance of digital utopia, which holds exciting possibilities for reimagining (and reorganizing) the archive. At the same time, I argue, there is real concern that crowds could agree on inaccurate or harmful beliefs, making this model potentially unsuitable for arranging the archive. I conclude by describing some advantages of computational methods, provided that those methods incorporate elements of the first two models. This hybrid position blends technology and individual participation in a way that surmounts some traditional concerns present in utopian imaginings.

The Demography of Philosophy

Demographers study the structure, interactions, and shifting trends of human populations. To date, artificial and opt-in populations have received little attention. This work applies demographic methods to the field of philosophy to understand its past, current, and future directions. For example, consider this adapted population graph showing North American philosophy PhDs in the period 1905–2005.

Population graphs show the overall structure of a population based on age group (i.e., birth year cohort); male and female figures are often shown separately, since sex has important implications for other demographic trends involving birth rate, education, health, and so on.  Population graphs often highlight the growth and age structure of the population, as well as changes in female and male birth rate and mortality.

For the purpose of studying philosophy, this standard population graph was adapted in several ways. Although individuals enter a population through birth or immigration, entry into academic disciplines is best characterized by completing a doctoral degree in the field. Thus, the year in which a person’s doctoral degree was awarded was used as a proxy for his/her birth year in the field.[1] (In this graph, there is no correlate for exit because many actual years of death are unknown and, even if they were, it is likely the individuals exit the field through retirement or unemployment years or decades before they die.) As a result, the graph is not a true population graph because it does not show any existent population over a single period of time, but rather several continuous populations within the period indicated. Nevertheless, the chart captures overall trends of growth and decline and gives a sense of the age and gender of the current population.

[1]  Data on doctoral degrees was compiled from dissertations housed in libraries at 17 North American institutions, as well as records contained in Dissertation Abstracts International, Thomas Bechtle’s Dissertations in Philosophy Accepted at American Universities, 1861-1975, and annual lists of doctoral degrees printed in the Review of Metaphysics. Sex was imputed to degree recipients based on first and middle names, as well as additional research about specific individuals. Of the original 14,926 degree recipients, the sex of 911 (6.1%) could not be determined, and these were excluded from the visualization

Phylo combines data sources, user feedback, and visual analytics to advance the study of the discipline of philosophy. Our work traces the flow of ideas across time by documenting the people, places, and institutions associated with philosophy. As a service to the philosophical community, Phylo also provides free information on professional opportunities and activities, including job listings and placement records.

0 Comments/ in *Publications, Philosophy, Theory, and Ethics / by chrisalensula
November 30, 2008

ABSTRACT.  Traditional representations of philosophy have tended to prize the role of reason in the discipline. These accounts focus exclusively on ideas and arguments as animating forces in the field. But anecdotal evidence and more rigorous sociological studies suggest there is more going on in philosophy. In this article, we present two hypotheses about social factors in the field: that social factors influence the development of philosophy, and that position of status and reputation—and thus social influence—will tend to be awarded to philosophers who offer rationally compelling arguments for their views. In order to test these hypotheses, we need a more comprehensive grasp on the field than traditional representations afford. In particular, we need more substantial data about various social connections between philosophers. This investigation belongs to a naturalized metaphilosophy, an empirical study of the discipline itself, and it offers prospects for a fuller and more reliable understanding of philosophy.

in *Publications, Philosophy, Theory, and Ethics / by chrisalensula
January 12, 2008